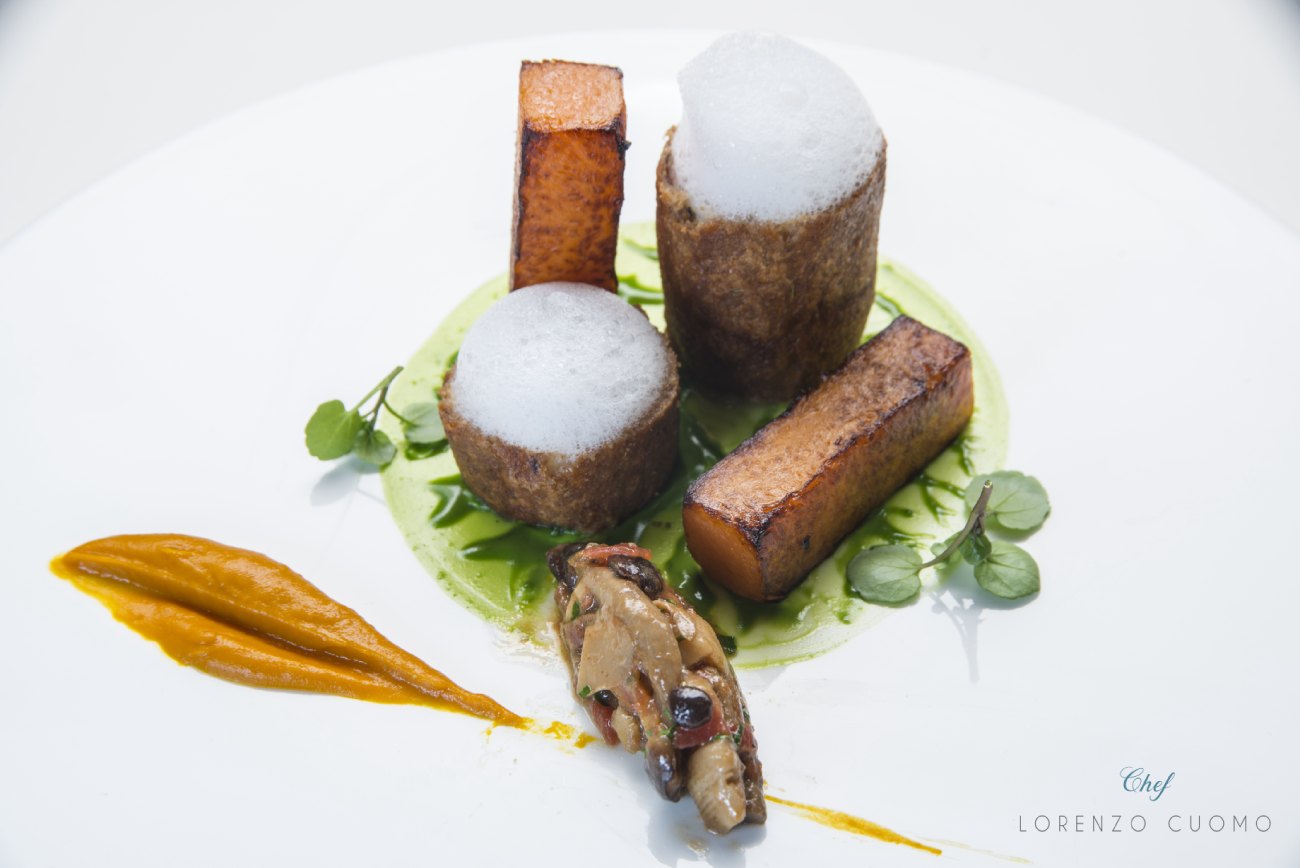 Monkfish cacciatore is a very special dish. Discover all details and the best recipe, cooked at Re Maurì, Michelin starred restaurant near Salerno (Italy).

What is an anglerfish?

Its Italian name, “rana pescatrice”, is misleading since “rana” means “frog”, thus you might think that we’re talking about amphibians. However, an anglerfish is a predatory fish that lives in the deep sea. Its Latin name is Lophius Piscatorius, while in English it’s also known as monkfish when cleaned, headless and ready for cooking.

The anglerfish is oval-shaped and has got a large and flat head. This abyss predator has got a cone-shaped body and a scaleless skin. Its mouth will be the first thing that captures your attention if you bump into one: it’s very large, with numerous sharp teeth. Its skin is brown, with purplish-blue to green tinges and irregular lighter-coloured spots that lend a “marbled” look to the fish. The anglerfish attracts its preys by using as bait the little skin growth, commonly referred to as lure, on the first ray of its dorsal fin.

It’s a solitary animal that rarely lives in groups with members of the same species. A mainly sedentary and extremely voracious fish, the anglerfish spends most of its day on the seabed. It lives at a depth of 20 to 1000 metres (sometimes even deeper) and during the day it lies between sand and rocks in order to camouflage itself with the surrounding environment, waiting for its preys. Almost invisible, it waits for a prey to be attracted by its fake bait. When this happens, it can swallow at surprising speed even preys that are much bigger than itself. During the night, it usually swims in more superficial waters.

Anglerfish can reach a remarkable size: 200 centimetre-long anglerfish weighing 57 kilogrammes have been caught! It’s possible to see this fish in the North Sea (including the Baltic Sea), in the Atlantic Ocean up to Iceland’s coasts, in the Western Mediterranean Sea and in the Black Sea. Anglerfish are long-lived animals, in fact they can live up to 20 years or more. A curious and interesting fact is that females can lay up to one million eggs, that form a floating agglomeration on the water surface, covering a few square metres!

The monkfish and the Mediterranean culinary tradition

The monkfish is a very refined seafood dish. Its flesh is particularly lean and its delicious flavour resembles some shellfish, such as lobster. The flavour obviously changes depending on the provenance. The anglerfish caught in the Adriatic Sea have got a more solid flesh and a gentler flavour, while the ones caught in Sicily sometimes have got a slight earthy aftertaste.

The monkfish can be cooked in so many different ways. In one piece or cut into slices, grilled, in the oven, en papillote, pan simmered with tomatoes and aromatic herbs, steamed, barbecued or cacciatore. While its pink and savoury flesh cooks, it becomes whitish.

The monkfish’s by-products are often used to season seafood risotto. In Veneto, the head can be bought separately and is used to make particularly tasty broth and gelatine.

The anglerfish is one of the most high-quality sea species of Italy’s (but not only) entire fish culinary landscape. It’s therefore not very cheap and it can be bought fresh or frozen, intact or headless. You might often find it skinless, ready to be easily prepared and cooked. However, in order to be 100% sure that it’s fresh, it should be purchased with the head still on. Its seasonality isn’t very restrictive, so it’s quite easy to find it all year round.

Monkfish cacciatore: the original recipe (and where to find it!)

Usually, when reading the word “cacciatore” (“hunter” in Italian), the first thing that comes to mind is a game recipe. However, although it’s not a very famous recipe, we would like to suggest the monkfish cacciatore. It’s an old recipe and it comes from the tradition that we could define “poor”, handed down for centuries by sailors and fishmongers.

It’s important to carefully cut and clean the monkfish’s tail and, if you wish to prepare it at home, it’s advisable to clean it thoroughly in order to prevent the flesh from deteriorating since it’s extremely delicate. In the meantime, you can prepare the sauce with minced tomatoes, onion and rosemary. Then, when the mirepoix is ready, you can add the monkfish. Let it cook for about twenty minutes without the lid. The monkfish needs cook in the water it produces, so don’t exaggerate with the wine if you wish to dilute the sauce a little bit. When cooked, the monkfish has to be served in slices and dressed with its sauce.

It’s an apparently easy recipe that has to be followed carefully step by step in order to avoid nasty surprises at the high point, that is bringing your creation to the table. By seasoning with rosemary, garlic and chili pepper, the flavour of the fish is enhanced and even tastier. At last, it’s possible to simmer with a little vinegar as desired.

At Re Maurì, proud of our Michelin star, we suggest the monkfish with fennel freselle, courgettes and cacciatore sauce. Our chef Lorenzo Cuomo has always been on the front line of preserving traditional recipes and flavours, but at the same time inclined to experimenting and blending also very different flavours.

Clearly, looks also count and the appearance of the dining room is often fundamental. For this reason, we are not afraid of defining our location with one adjective: enviable! Savouring a monkfish just outside Vietri sul Mare, in the heart of the Amalfi Coast, will make you fully relive what fishermen used to experience.

Therefore we suggest you book a table at our restaurant as soon as possible. If you are looking for a state-of-the-art monkfish cacciatore, you won’t find a better place than Re Maurì where to taste it!